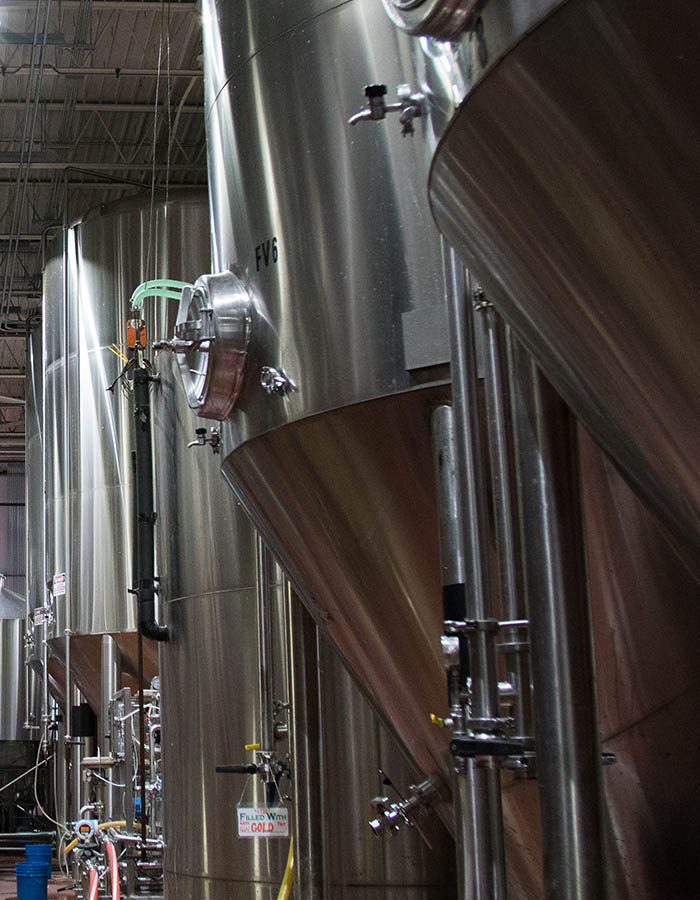 We are currently brewing on a 40bbl NSI brewing system with a Siemens Braumat automation package, allowing us to crank out the equivalent of 80 kegs per brew.

Base 2-Row malt and specialty malts are milled in our Kunzel 4-roll malt mill, allowing us to achieve the best grist consistency. Once milled, the first stop for the ground malt in the brew house is the lauter tun. This is where the malts are mixed with hot water to create an oatmeal like substance called “mash”. As the mash rests, the enzymes in the malt begin to convert all the starch into fermentable sugars. Once the sugars have been created, the sweet wort is separated from the spent grains and pumped into the boiling kettle. The spent grain is given to Hemlock Hill Farms to feed their growing heard of cattle. We’re very happy to provide this valuable food source to a local farmer free of charge.

Once the wort is in the kettle, we start the boiling process. This is where we introduce the hops, which will add flavor and bitterness. This is also when we add spices and any other interesting ingredients that we might want to add to our beers.

Once the boil is complete, we pump the beer into the Whirlpool and add the final charge of hops that will add both flavor and aroma to the finished beer. After the wort has had a chance to rest and settle, we pump it through a heat exchanger, cooling it to 68F on its way to the Fermenters.

Our main fermentation tanks contain 4960 gallons (the equivalent of 160 barrels), and require us to brew four times in our brew house to fill. As they’re being filled, we add fresh yeast and oxygen to the wort to ensure a healthy fermentation.  If the beer being made is an ale, the temperature will be maintained at around 68° F (20° C°) for about two weeks. If the beer is a lager, the temperature will be maintained around 48° F (9° C).

When fermentation is complete, most of the yeast will have settled to the bottom of the fermenter. The bottom is cone shaped, which makes it easy to capture and remove the yeast. It is at this point that we introduce more hops to our hoppier beers, in a process called dry-hopping. We dump in over 1.5lbs of hops per barrel, which dissolve in the beer and impart a beautiful aroma and flavor.

When fermentation has finished, the beer is cooled to about 32° F (0° C). This helps the remaining yeast settle to the bottom of the fermenter, along with any other undesirable protein.

After most of the solids have settled to the bottom, we harvest the yeast to be reused on the next brew, and then pump the beer into the centrifuge for clarification. 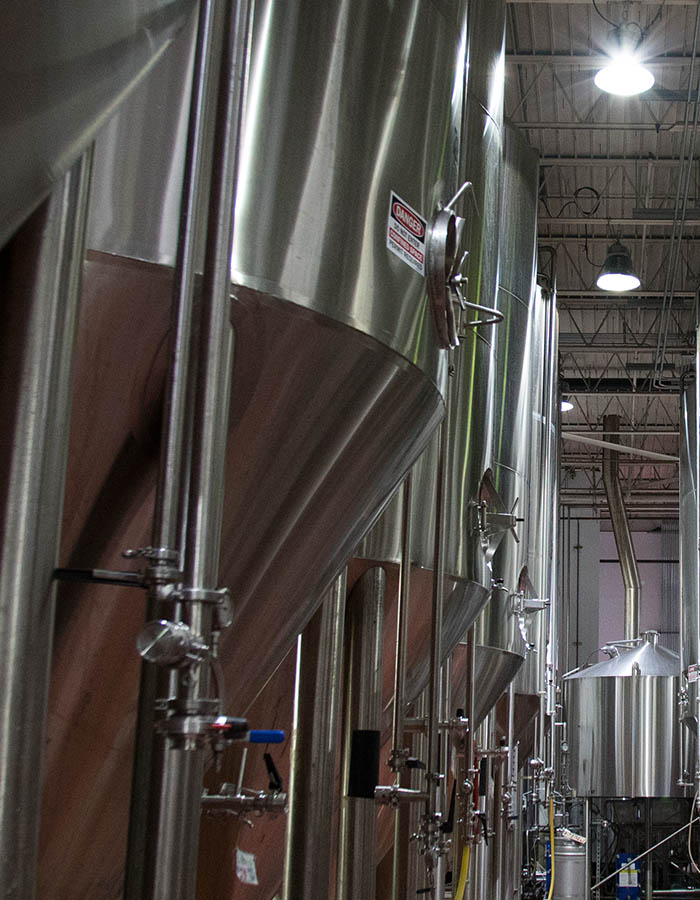 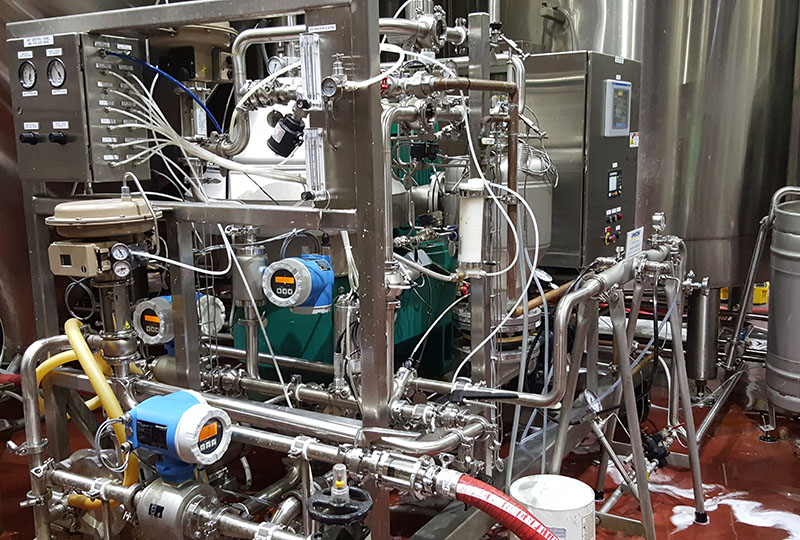 We do not filter any of our beers. The only method we use for removing excess yeast and unwanted proteins is putting it through a centrifuge. By using centrifugal force, the heavier particles are forced to settle out, allowing the clear beer to move down stream to the bright beer tanks. In the bright beer tanks, we add carbonation to give the beer the effervescing and refreshing qualities we all love. From here the beer is packaged into bottles and kegs.

In comparison to the main brew houses’ 40 barrel system, the Pilot Batch System is a 7 barrel brew house. This system brings us back to our roots, and is a no frills, completely manual system. It’s on this system we have the chance to experiment with new styles and ingredients, and try things we’re not ready to brew on a larger scale. A ton of very special and unique beers have come from this system, most of which never leave our tasting room…so come by for a taste! Everyone that works at Captain Lawrence has a chance to brew on this system, which is what makes it so special to us. 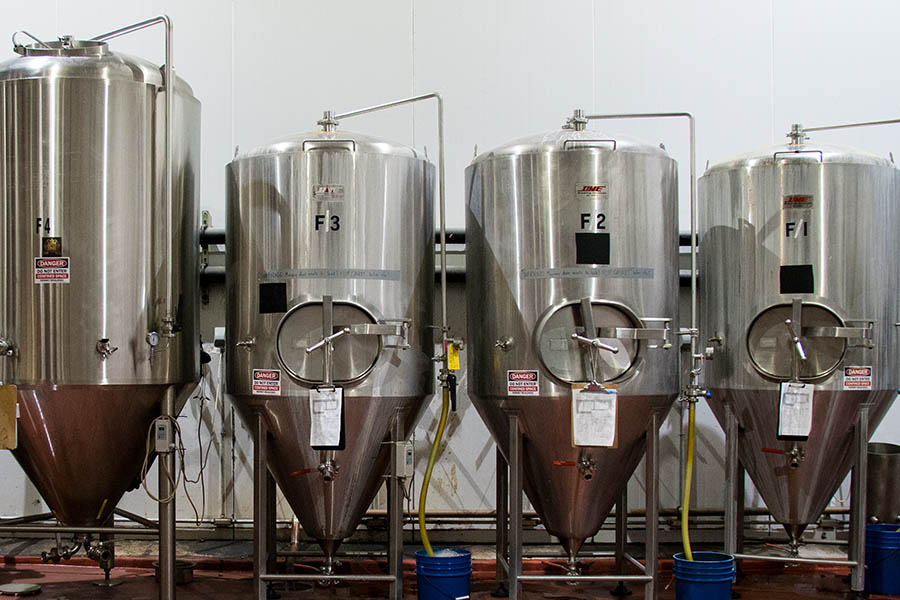 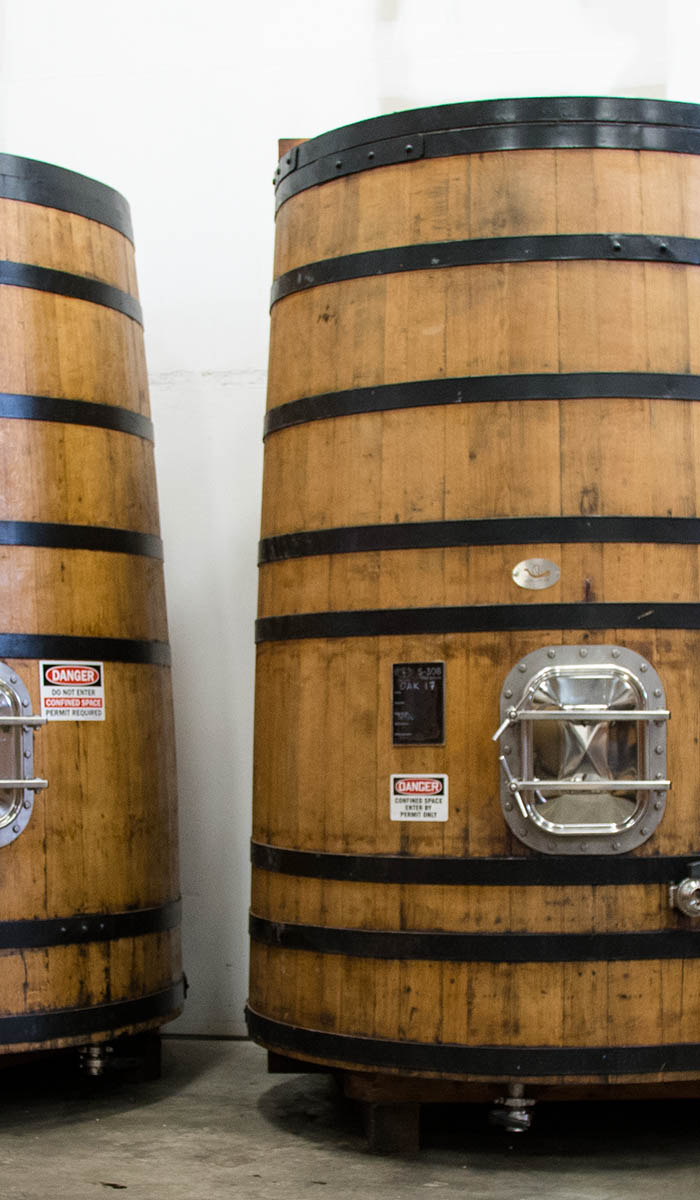 The “Funk Facility” is the newest addition to the brewery. Built in March of 2015, it added approximately 5,000 sq ft to the main production facility.

This is the place that we fill, age, test, and package all our sour ales and experimental barrel-aged creations.

We have been aging beer in oak since we opened in 2006, winning our first Great American Beer Festival medal in 2007 with our first sour ale: Cuvee de Castleton, a beer we still brew in limited batches to this day.

Currently we use 55 gallon barrels, which previously held:bourbon, rum, apple brandy, wine, and Irish whiskey. In addition to the smaller barrels, we also have a growing “forest” of large Italian oak barrels and oak Foudres, ranging in size from 20bbl to 63bbl.

The beers that come out of this facility often age for over a year, and sometimes over two, so be patient, and you will be rewarded with some truly unique beers.

Our keg racker was purchased from Harpoon Brewery in 2012 after they outgrew it, and it allows us to clean, sanitize and fill around one keg per minute.

The keg gets a good cleaning both outside and inside. It’s sterilized with steam, and then filled with co2 to block out oxygen and keep the beer from spoiling. Once the beer is poured into the keg, it’s put into the refrigerator, where it sits waiting for your next keg party.

The bottling line is similar in that the bottles are rinsed, purged of all air, filled under pressure, and then immediately capped to avoid the uptake of any oxygen (the enemy of beer).

Our current bottling line is a GIA 5003, capable of filling close to 85 bottles per minute. We are fortunate to have a great downstream packaging line comprised of a Makro labeler and an APE 6 pack stuffer and case erector. This allows us to fill over a 1000 cases a day to ensure you never run out of fresh beer! 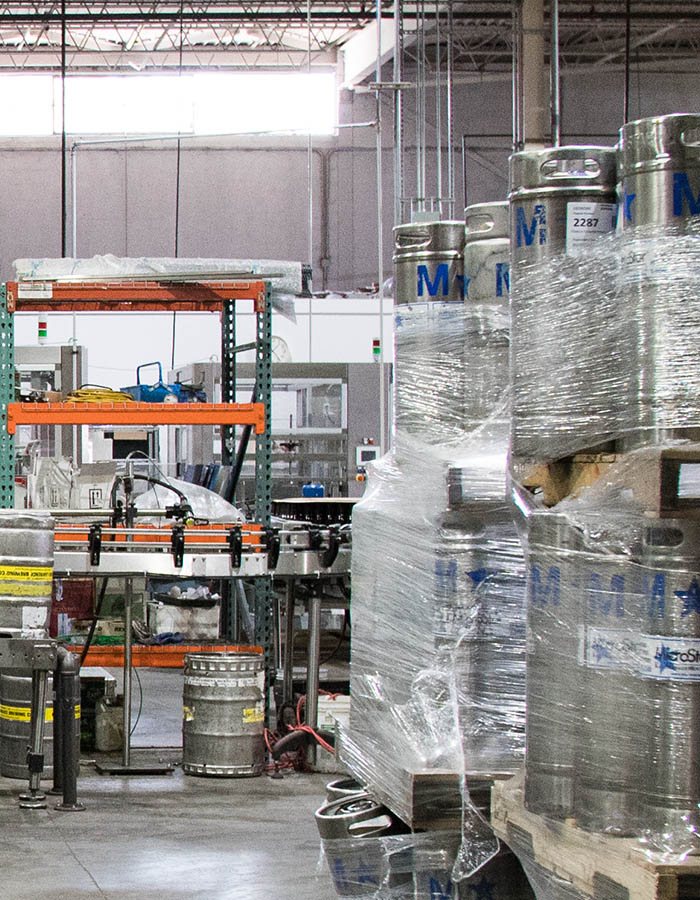